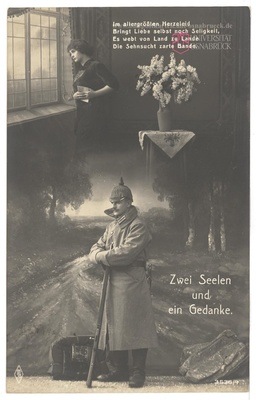 The collection of picture postcards from the period between 1895 and 1945 has been owned by the Osnabrück University Foundation since November 2010. The collection is kept as a depository in the University Library of Osnabrück and is supervised by the Department of Historical Musicology of the Institute for Musicology and Music Pedagogy.

The approximately 12,000 postcards presented here have been systematically collected since about 1980 and selected according to the content and expressiveness of their themes and motifs. They provide an insight into the political, social and aesthetic thinking of the period between the turn of the century and the Second World War. Many examples illustrate which aspects of life have attracted attention and what many people have been interested in.

Postcards in the true sense of the word have been around since 1870. Heinrich von Stephan (1831-1897) introduced the postcard in 1870 and founded the "Weltpostverein" in 1874. However, it was not until 1900 that this means of communication gained widespread acceptance. The highlight of the production was the period of the First World War, which is also well represented here with military postcards. In the Weimar Republic and the Nazi era, interest dropped and with it the number of cards. For this reason, the 1930s and 1940s are not quite as present as the first two decades of the 20th century. The end of National Socialist rule and the Second World War caused such a serious cut in Germany's political and social circumstances that it seemed sensible and legitimate not to continue the collection beyond 1945 into the post-war period.

The pictures are used for research and teaching purposes and bear the logo of the University of Osnabrück. The scans of the various cooperation partners are each marked by their own owner's notes, which indicate where the original cards can be found.